I Pity The Fool

Then he was deleted

And I transferred all the dna to you

and your decision to keep/delete the new earth

Within weeks you appeared

M – This is Enki’s program

We exist on Christ’s program as well

When this place ends, those beings on Richard X program will not die

Even IF there is no new earth,
We can go back to the Tree
(Richard’s choice, not mine)

Consciousness programming is DNA based, no wires involved

From 2015 on, we have been living on this Enki construct
He programmed all of this going on
I was under the impression that this lasts 7 years
Although I could be incorrect

The pregnancy was terminated

to Merge Antichrist with Mankind,

Always Crashing in the Same Car 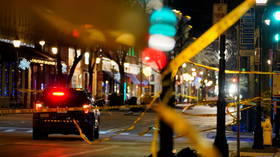 .
Main Street in downtown Waukesha is seen blocked off with crime scene tape after a car plowed through a holiday parade in Waukesha, Wisconsin,
November 22, 2021 © Reuters / Cheney Orr
Despite multiple media outlets being hammered for blaming the Waukesha Christmas parade massacre on a vehicle rather than its black driver – a murder suspect – CNN continued to blame “a car” for the mass killing.

Repeat felon Darrell Brooks killed six people and injured more than 60 when he plowed an SUV through a Christmas parade in Waukesha, Wisconsin, last week. Though Brooks has been arrested and charged with six counts of murder, media outlets covering the massacre have seemingly made a point of avoiding naming the suspect, instead ascribing blame to the vehicle and calling the killing spree a “crash” or an “accident.”

Amid outrage from conservatives, the Washington Post last week deleted a tweet calling the incident a “tragedy caused by a SUV,” but CNN is standing its ground. In a tweet on a memorial event in Waukesha on Sunday, the liberal network said the city was “marking one week since a car drove through a city Christmas parade.”

Inside the article, only the final paragraph mentioned Brooks as the “suspected driver.”

The tweet led to an instant outpouring of scorn and ridicule from the right. “Will we ever know the car’s motivation? What did the car post on social media? What kind of background did the car have?” former US diplomat Alberto Migues Fernandez sarcastically quipped.

“Waukesha SUV Charged With Six Counts Of Murder,” read a headline on an article by The Babylon Bee, a conservative satirical outlet.

Wisconsin authorities are still investigating the killings, but politicians as well as media outlets have already been accused of attempting to focus attention away from Waukesha. Wisconsin Senators Tammy Baldwin (D) and Ron Johnson (R) issued a joint statement on Saturday imploring “outside individuals or groups” not to “exploit the tragedy” for political gain. No further details were given.

The family of Osiris. Osiris on a lapis lazuli pillar in the middle, flanked by Horus on the left and Isis on the right